Between the age of 15 and 50 years when a lot of women are able to conceive, some challenges may occur.

First, vaginal infections are very common and may result from an unprotected sexual intercourse.

Secondly, women at this phase of life are also more prone to have uterine fibroids, as more than 60 – 70 percent of women will have a fibroid.

Another reason to worry during your reproductive years is an ovarian cyst.

How does an ovarian cyst occur?

Between 2 of your period, your body undergoes changes that result in the release of an egg from your ovaries. This is called ovulation and mainly occurs because of the effect of hormones.

Before ovulation, estrogen is particularly dominant and causes plenty of follicle in your ovaries to develop. As these follicles develop, only one grows very big and contains the egg to be expelled.

During ovulation, this “very big follicle” now breaks open and pushes the egg toward the fallopian tube.

Subsequently, after the release of the egg, the follicle forms the corpus luteum that aid the development of the endometrium by secreting progesterone and estrogen. 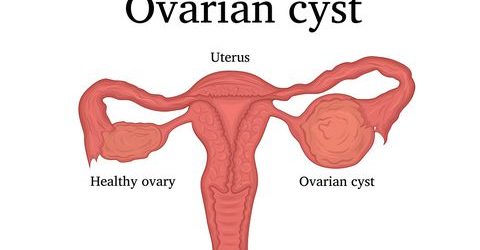 It’s possible that women may have a cyst that contains different kind of tissues – hairs, bone, and sometimes cartilage. This is known as a dermoid cyst. Another type of cyst is the endometrioma cyst that usually contains dark blood.

Depending on the kind of cyst, you may experience different symptoms. Most women that have a cyst will not even show any symptoms as within 1 – 3 month cyst will resolve without any treatment.

Nevertheless, some women may be unlucky when a cyst ruptures and releases its content into the abdomen. This may result in severe pain and may sometimes be a surgical emergency.

What are the symptoms of an ovarian cyst?

An ovarian cyst in most women will not show any symptoms at all. In fact, in some women, cyst on the ovary is detected after an ultrasound scan for some other medical reason.

Here’s an email I received from Emily

I have been trying to get pregnant for about 6 years after getting married. But its be unsuccessful. I was recently asked for an ultrasound scan for my doctor which reveals i have multiple cyst on my ovaries. Is this normal? Could it be the reason am yet to conceive?

Just like Emily, a lot of women will have a cyst and never even get to feel any symptoms. However, some women will be symptomatic and usually experience any of these signs

What are the symptoms of a ruptured ovarian cyst?

If you’ve been diagnosed with an ovarian cyst, there is a tendency that your cyst may grow big or burst open into your abdomen releasing its content. This usually occurs after sexual intercourse or a vigorous exercise.

Symptoms of a ruptured ovarian cyst are

If a cyst that contains clear fluid ruptures, within a few days, your body absorbs its content and does not usually require further treatment.

On the other hand, a dermoid cyst that contains different particles (hair, bones, and cartilages) or a hemorrhagic cyst (that contain blood) will result to sharp tummy pain that may require surgery from your doctor.

One other reason to worry is a large ovarian cyst that pulls your ovary and “twists it” thereby obstructing blood flow to your ovaries resulting in a sharp belly pain.

If you’ve been diagnosed with a cyst, any sudden sharp pain should be communicated to your health care provider.

Ovarian cyst usually will go unnoticed a lot of times. However, if they rupture, you will experience pain in your abdomen and sometimes a new type of discharge.

Depending on the content of the ruptured cyst, the volume and color of our discharge may change.

Here’s another email I received from one of my readers

I need help as i feel something bad is happening. Last week i had severe pain in my belly and quickly informed my doctor about my problem. Turns out that i had an ovarian cyst rupture.

I was admitted for about 24 hours and asked to go home. But now, i see bloody discharge that sometime may be yellow. Is this normal or should i see my doctor again?

If you’ve had an ovarian rupture, it’s possible you may experience a brown discharge; Though there are many other reasons for brown spotting listed here.

This will occur in women that have had an endometriosis cyst, where tissue that usually covers the inner lining of the uterus and displaced to the ovaries and forms a cyst. Commonly, they are referred to as “Chocolate cyst”.

A chocolate cyst may vary in size and may be small or large and usually contains dark blood. This black colored blood, after the rupture of the cyst, will mix with your vaginal discharge and form a black, dark or brownish looking discharge.

Most commonly, it’s possible you could have a cyst rupture without blood leaking into your abdomen.

If you have a ruptured cyst without any bleeding (clear fluid), you will experience a clear and white discharge. Also, depending on the size of the cyst, vaginal discharge may be much more than normal and excessive for a few days.

Worried about the color or volume of your discharge after a ruptured ovarian cyst? Let us know.