If you are wondering how you should feel with an ovarian cyst, it’s possible you have pain in your abdomen, or your doctor has recently told you that there is a cyst in your abdomen.

The truth is, most women that have past menarche (when women get their first period), will have had a cyst and “not know”. This is because ovarian cyst rarely will cause symptoms.

Here’s an email from Sophia (one of my readers)

I have been trying to conceive for years and it’s been difficult. Recently, I decided to see an O/G specialist for help. During the routine abdominal ultrasound, my doctor explains that I have a cyst on my ovaries.

I’m surprised because I did not feel any symptoms. Neither do I feel any cramps or pain in my belly.

My Doctor says it’s also likely the reason am yet to get pregnant, that I need to lose some weight. Is it possible i can have a cyst in my belly without even knowing?

Just like Sophia, a lot of women will have had an ovarian cyst on their ovaries and not be aware when a cyst developed and disappeared.

What causes an ovarian cyst?

Before ovulation occurs, plenty of ovarian follicles will grow in size. However, during ovulation, only one follicle grows to maturation and contains an egg to be released.

At ovulation, this mature ovarian follicle (Dorminat follicle) ruptures and expels an egg into the fallopian tube.

After ovulation occurs, your body works by transforming the ruptured follicle to CORPUS LUTEUM that aid maturation of the uterine endometrium through raised hormones (progesterone and estrogen).

A cyst usually forms when the ovarian follicle fails to burst open and instead accumulate fluid and forms a fluid-filled bag called a cyst.

Another way a cyst can develop is after the rupture of the dominant follicle (corpus luteum cyst). This occurs if rupture the corpus luteum form a cyst.

While some cyst may just contain a clear fluid, others may contain bright blood, dark blood, hair, bone and even tooth.

Depending on the content and size of your cyst, and if you have complications, you will have different signs.

This article explains what an ovarian cyst feels like and signs that shows there are complications.

If you are experiencing pain in your abdomen, you should inform your doctor for clinical examination and investigations to be carried out. Most times, abdominal pain is not a constant symptom of an ovarian cyst.

In fact, if you are experiencing right or left ovary pain, it’s most likely complicated if due to an ovarian cyst. Here are other causes of low abdominal pain.

Should you have a cyst, here are symptoms you may experience.

Due to the size of a cyst, some women will have distended abdomen and feel discomfort in their belly. A large ovarian cyst may become problematic, especially when it stops the blood supply to your ovaries (ovarian torsion) and causes you to feel sharp severe pain.

If you’ve been told you have a large cyst, you must inform your doctor immediately if you are getting severe sharp pain, especially on one side of your abdomen. If nothing is done quickly, it may cause the affected ovary to die.

Usually, some women may begin to feel a little pain at their back. This may worsen if a cyst ruptures.

If you are having severe pain during sexual intercourse, there are many reasons why it could happen. Vaginal infections, pelvic inflammatory disease, large uterine fibroids, and endometriosis are common causes of pain during sexual activity.

An ovarian cyst may also cause pain, especially during a rough sexual intercourse. The first step to take if you are having a persistent pain while making love is to inform your doctor.

Yes, it quite common that a lot of girls get ovarian cyst without any symptom. The fact you feel nothing does not rule out a cyst.

Most times, if you don’t feel any symptoms, the cyst will likely go away without any form of treatment.

Other symptoms you may experience are nausea, vomiting, pain in your breast, and painful bowel movements. 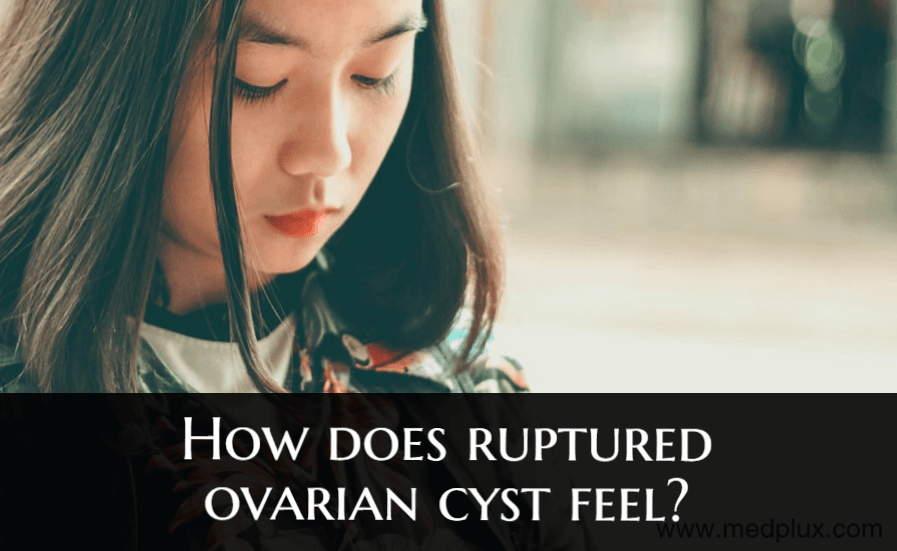 What does it feel like when an ovarian cyst ruptures?

Remember that if you are feeling belly pain, most times, it could be something else rather than an ovarian cyst. Having said that, some women may have a cyst that ruptures and causes pain.

Generally, due to strenuous exercise or a rough sexual intercourse, a cyst may rupture and release its content into your abdomen.

Depending on what is contained inside the ruptured cyst, symptoms will vary from among women. If a cyst contains dark blood (chocolate cyst), it expels its content into your abdomen with some women experiencing a brown vaginal discharge after rupture. Also, if your cyst contains clear watery fluid, you will feel mild pain that will subside in few days.

If you’ve been told there is a cyst inside your belly, any of these symptoms means it has ruptured or cause ovarian torsion.

Both ovarian torsion and ruptured ovarian cyst are life threatening complications that should be treated quickly. So, don’t wait if you feel this way. Inform your doctor right away. 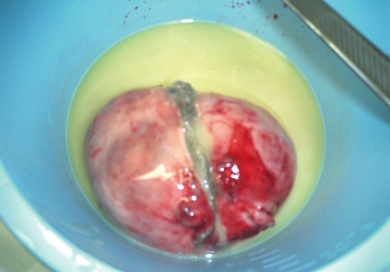 What to do if I have an ovarian cyst?

If you are like most women, there won’t be any need to see your doctor. However, if you feel persistent pain in your abdomen, nausea, vomiting, and abdominal distention, it’s important you should see your doctor.

Then again, there are many reasons women will have these symptoms. Most pregnant women feel this way, so be sure to confirm if you are pregnant or not.

Usually, a large ovarian cyst can be felt in your abdomen, and your doctor will advise you to be patient for a while. At this time you should avoid stressful conditions, strenuous exercise and have lots of bed rest.

In women whose cyst continues to grow after watchful waiting, there will be a need for a surgical approach.