The position of cervix after ovulation may indicate ovulation has occurred or give you a clue if you are pregnant or not.

Are you trying to detect pregnancy or your safe period by checking your cervical position after ovulation?

Becoming familiar with the ovulation cycle and ovulation signs are crucial to know your fertile days and safe period.

What is ovulation and when does it occur after period?

Ovulation is part of your menstrual cycle and means your ovaries expel one or more eggs into your Fallopian tubes for fertilization. Most women will have ovulation in the middle of their menstrual cycle, that is, 14 days before your next period.

The truth is, if you can sense ovulation signs, you can know when to avoid pregnancy or get pregnant easily.

So what’s your fertile window?

Between two of your periods, 6 days can easily get you pregnant after unsafe intercourse. The fertile days occurs 5 days before your ovaries expels egg ( ovulation) and a day after ovulation takes place.

So, what’s the cervix?

You may probably not know how to detect your cervix yet.

The cervix is like a tube that connects the uterus to the vaginal area. It can be felt easily at the beginning of your menstrual cycle and the end.

Sometimes, it may be high or low in the vaginal canal depending on if you’re ovulating or not.

If you get pregnant and during labor, the cervix opens up allowing your baby to pass through.

How can I predict when ovulation will occur soon?

If you’re able to identify symptoms of ovulation, avoiding pregnancy becomes easy. Any of these signs show you are likely to ovulate in a few days

1.  Cervical mucus from the vaginal area

Cervical mucus from the vaginal area changes during your menstrual cycle. It may be milky, thick, watery or sometimes brown in color.

The color, volume, and texture of your cervical mucus will change from time to time.

Just before you will ovulate, you may notice cervical mucus getting stretchy, watery or egg white 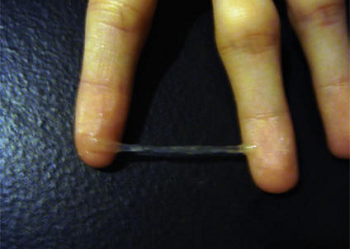 How to check your cervical mucus?

Is it watery, non-smelly, stretchy between your fingers without breaking? This type of discharge indicates your ovulation is very close.

Is it sticky on your finger or creamy white? This kind of discharge is non-fertile?. If you have intercourse during sticky cervical mucus, it’s very unlikely to get pregnant.

2.  Dip in your basal temperature if checked regularly

If you regularly monitor and record your body temperature in the morning before any activity, you can tell when ovulation will occur.

Purchase a very sensitive thermometer which can show minimal changes in temperature. This is because, just before you will ovulate, there will be a dip in your body temperature.

3.  You will have heightened interest to have intercourse

Sexual desires can increase before you ovulate. This is a natural response to get women to have intercourse. If you notice very increases urge for love-making while expecting your ovulation, it’s a sign ovulation will occur soon

4.  The position of cervix during ovulation

During your period and just before it ends, the uterine cervix is low and feels hard when examined.

As you get close to ovulation, your cervix becomes soft and gets higher up in the vaginal canal. During this time, the cervix is soft and very hard to detect.

How to detect cervical positions 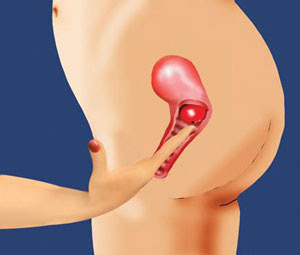 How can I detect ovulation has taken place?

Just like it’s possible to know when ovulation will occur, you can detect when it has occurred. Some of the signs after ovulation are; 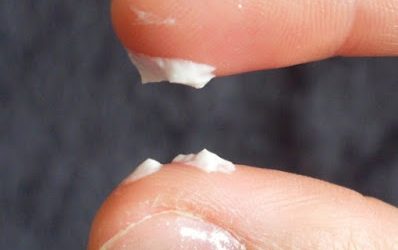 Just after ovulation occurs, there is a surge in progesterone hormone, which thickens cervical mucus to become sticky or creamy discharge.

Due to high progesterone levels, your basal temperature will rise.

The position of your cervix becomes hard and low in your vaginal canal.

FAQs about the position of cervix after ovulation

Let us know your concerns below

Cervix after ovulation if pregnant?

If you are pregnant, your cervix feels soft and high up your vaginal canal with a closed cervical os, the opening that connects the cervix to the vaginal area.

The truth is that cervical changes or position varies among women and is not the best indicator of pregnancy. However, if your cervix is soft and high up your vaginal canal while expecting your next period, it’s likely you’re pregnant.

Bonus Tip: You may be pregnant without knowing. Watch this 1-Minute-Video to Discover 16 Most common Pregnancy Signs

Cervix position before period is low and hard with a thick or dry vaginal area.

However, cervical position early pregnancy is soft and high in your vaginal canal but not as high as when you were ovulating. In some women, it may take some time for your cervix to get soft, closed and high. Early pregnancy symptoms are

Cervix high and hard, what does it mean?

If your cervix is high and hard just before period or after ovulation, it means you’re not fertile.

Cervix high and soft before period?

If your cervix is high and soft before period, it’s an early indication you’re pregnant. It is easy to have a pregnancy test or observe for other pregnancy symptoms.

It’s possible that during early pregnancy your cervix will still feel low and hard. The time it takes for the cervix to get high and soft during pregnancy varies among women.

In some women, cervical change during pregnancy occurs very early while it may occur late in others.

Cervix low and soft, Am I pregnant?

If your cervix is low and soft before period or after ovulation, it could mean pregnancy.

If pregnant, the cervix moves up your vaginal canal but not as high up while ovulating. It’s advisable to run a pregnancy test if you have a low and soft cervix after a missed period.