Question: What are the parts of foot bones?

Learning your foot anatomy is important especially to know which bone is currently causing foot pain.

Also, for students and health professionals, it is critical to understand the foot anatomy which basically improves your knowledge of bone position, ligament attachment, and the way tendons run on the foot bones.

What you will learn in the article

The foot is located after the long shin bones and it starts from the back of your ankle to your toes. Anatomically, the foot is divided into 3 sections. The hindfoot, midfoot, and the forefoot.

The midfoot bones are the navicular, cuboid, and 3 cuneiform bones

The forefoot is the furthermost part of the foot and consist of metatarsal bones and phalanges that make up your toes. 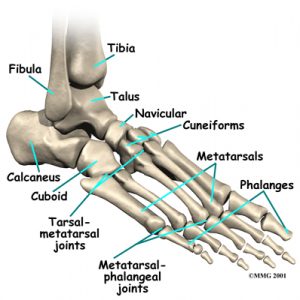 Like already mentioned, the hindfoot is the posterior part of the foot. Its made up of 4 bones; The calcaneus, talus, fibula, and tibia bones. 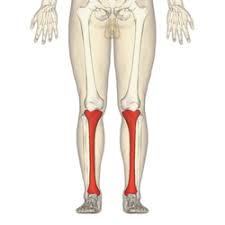 The tibia is one of the 2 bones that make up the leg. It extends from your knee joint upwards to the ankle joint downwards. The tibia bone makes 4 joints in the body

The tibia is the second largest bone in the body and is firmly located in the inner middle part of the leg. At the foot, it articulates with the talus and fibula to form the ankle joint.

At the lower end, the tibia bone expands, forming a prominence on the inside of the foot. This is called the medial malleolus and is critical for attachment and passage of tendons. 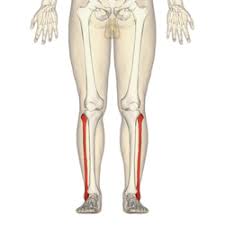 The fibula is the second smaller shin bone and extends from the knee down to the ankles. Like the tibia, there are 2 fibula bones in your body. The right and left fibula bones.

However, unlike the tibia bones, the fibula bone is not involved with weight bearing though helps in the stability of the ankle joint.

At the knee, the fibula bone articulates with the tibia bone (superior tibiofibular), then extends downward to ankle and enters the hindfoot.

Most importantly, the fibula bone forms a lateral prominence on the outside of the foot (lateral malleolus) which is also important to ensure ankle stability 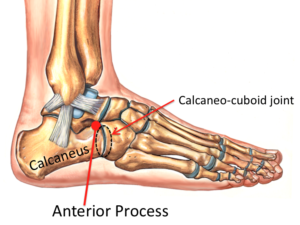 The calcaneus is the largest foot bone and is located at the back of the hindfoot. It is important for the attachment of the Achilles tendon which attaches to the posterior part of the heel bone.

The talus bone is the second largest bone in the entire foot, and unlike the rest bones, there is no attachment of muscles. It forms the lower part of the ankle (formed collectively by the tibia, fibular, and talus bones).

Primarily, it functions to transmit your body’s weight to the foot through the talocalcaneonavicular joint. This joint is formed by the talus, calcaneus, and the navicular bones.

The talus bone may also be fractured. If it does, healing is difficult due to the decreased blood supply to that part of the foot. 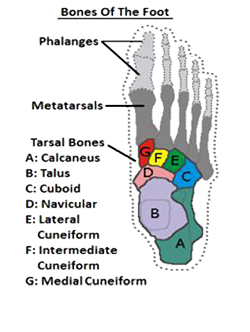 The midfoot is made up of 5 tarsal bones. Together with the metatarsal bones (proximal bones in the forefoot), they form the arch of the foot.

The midfoot bones are the navicular, cuboid and cuneiform bones 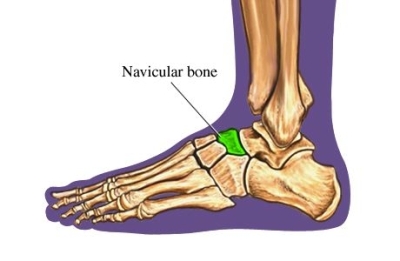 The navicular bone is one of the midfoot bones. It is located on the inside of the foot and rarely gets fractured.

The navicular bone may get fractured from repetitive use or direct injury. If this happens, healing takes weeks to months with pain and swelling inside the foot. 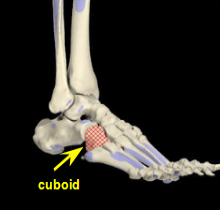 Particularly, incomplete displacement of the cuboid bone can cause swelling and pain on the outside of the foot. This is called cuboid syndrome which requires treatment by a doctor.

The 2nd cuneiform bone lies in between the 1st and 3rd cuneiform bones. It is flanked in front by the 2nd metatarsal bone and posteriorly by the navicular bone.

The forefoot bones are located after the midfoot. They consist of 5 metatarsal and 14 phalanges bones. So, they are 19 in number. 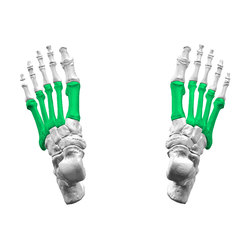 Like already mentioned, there are 5 metatarsal bones in the forefoot and the primarily help to connect the tarsal bones to the toes. They are numbered from inside to the outside as 1st, 2nd, 3rd, 4th, and 5th metatarsal bone.

In front, all metatarsal bones are connected to the phalanges through the metatarsophalangeal joints.

The metatarsal bones are easily prone to stress fractures that happens when the foot is continually put under pressure. This is common in athletes especially basketballers and footballers.